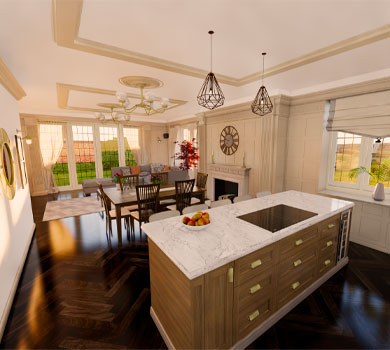 Our in-house design team have now completed the visuals for our much-anticipated apartment development at the former MD1 building in Whitchurch, Buckinghamshire.

Paying homage to the original architectural features, this scheme retains its time stamp of the early 1900’s yet is intertwined with more contemporary aesthetics, offering a feeling of grandeur and deep history.

The Firs Building is affectionately known as ‘Churchills Toy Shop’ It was actually the HQ of a highly secret weapons research, development & manufacturing establishment which played a crucial role in the Allied victory. MIR was a division of Military Intelligence Research, which was a department of the War Office. It was originally based in London, however, after an air raid, it moved to The Firs, which was the second home of a Major who was generous enough to allow for the repurposing of his house.

During WWII 26 different devices were made there, including the ‘Projector, Infantry, Anti-Tank’ (PIAT) which was a weapon that you could carry around that would release explosives against tanks.

The concept visuals show the existing mock Tudor exterior for The Firs Building will be kept in place throughout and existing timbers & cladding will be carefully restored to sit alongside new landscaping to help bring life back into this 120-year-old house. The Stonehouse interiors concept for the renovation has taken its lead from the numerous expansive timber panelled rooms that were used by Churchill himself back in 1939. Existing motif details, wall panelling, decorative timbers original flooring and stained-glass windows will again be restored to their former glory to sit alongside contemporary materials and bespoke furniture pieces to create 6 luxury 1 & 2 Bed apartments.

The 12 month project has now commenced with the strip-out works and we hope to complete mid-2022.